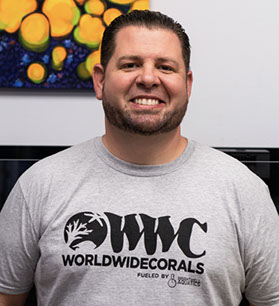 He is a co-founder/co-owner of the internationally renowned World Wide Corals (WWC).  Lou is the Chief Operation Officer, overseeing its daily operations, including aquarium service, trade shows, retail store, and the WWC website.

Currently, Lou is heavily involved with the development of the 2 new World Wide Corals retail locations that are set to open in Central Florida Summer of 2019.

Lou is originally from Philadelphia, PA and now resides in Orlando Florida.  Lou is a long-time saltwater hobbyist with an affinity for reef tanks. 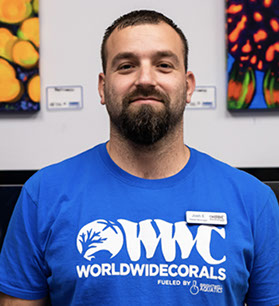 A key personality in the Popular Bulk Reef Supplies Video Series called BRS/WWC Hybrid Method. Josh’s biggest passion is caring for and handling WWC’S prized livestock. He is a self-proclaimed Stick Head with Acropora being his favorite coral.  On any given day you can find him splitting time between the WWC Retail Store and the WWC Farm.

Josh is the World Wide Corals Retail Store Manager.  Originally from Norwich, New York, he now resides in Orlando, Florida. He has been with WWC for 6 plus years and is a master of all aspects of the saltwater hobby.