Jason Fox is known for selling insanely vibrant, rare corals, and popularizing new coral species into the hobby.  These corals include cyphastreas that branch, rainbow-colored montiporas with unusual textures, the now ubiquitous Jack-O-Lantern leptoseris, and of course many multi-colored acroporas.   Fortunately for reefers, these discoveries grow well in captivity.

Though for Jason, this prosperity means that they rapidly spread through the hobby and push his customers demand for even more new varieties of corals.

Jason must continually head back to the wild, cultivate new relationships with licensed collectors, and search for new corals appropriate for the hobby.

See Jason’s journeys traveling with local licensed collectors through coral reefs searching for new corals and learn some of his captive rearing “secrets. 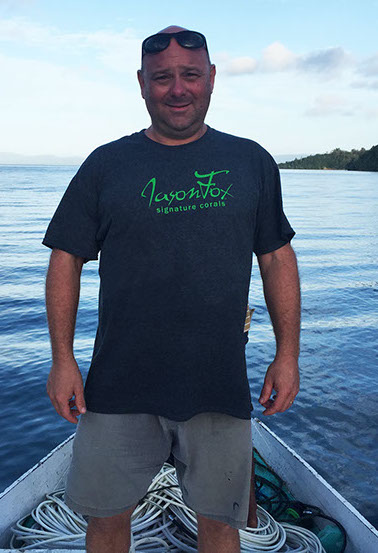 I have been into aquariums and the ocean since the 70's as a kid. Then in the 80's and 90's, I started keeping multiple freshwater and marine tanks.

In the early 2000’s, I started growing and hunting new strains of coral. My obsession for Sps corals and reef aquariums went to another level.  I was so curious about how the reef looks and grows in nature, I started diving the South Pacific in 2004.  That was the start of my diving addiction.  Since then, I have done over 200 dives mostly in the South Pacific.

Now I have contacts in Indonesia that are collectors and exporters that I go diving with every year, collecting new exotic pieces to grow and aquaculture for years to come. Currently I have over 2500 gallons of reef I'm maintaining. There is not a day that goes by I'm not cutting coral.

I will explain the reef systems I am maintaining, touch on the topic of coral husbandry, and talk about my Indonesia diving adventures.